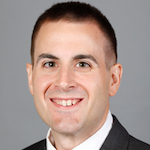 John Lukach was named the director of multimedia and production for Cornell University in 2013. Lukach oversees all the department live video broadcasts and the various venue video board productions. During his time at Cornell, he has increased the number of sports broadcasts all in-house and has helped to expand infrastructure at locations in preparation for the transition to ESPN this past season. Lukach is currently overseeing a central control room buildout to continue the growth of the athletic department’s live broadcast potential both for athletics and the academic side.

Prior to his time with the Big Red, Lukach served as the intern for video and new media at the America East Conference. He earned a bachelor’s degree in public relations, along with a degree in radio/TV from the University of Akron in 2010. Lukach earned his master’s degree in sport administration in 2012. While at Akron, Lukach worked as an undergrad on ZipsVision, the athletic production crew. He was brought back after graduating in 2010 to take the role as the graduate assistant for ZipsVision, which he held for two years. Lukach has volunteered at the 2013 NCAA Women’s Basketball Final Four in New Orleans and at the 2011, 2013, and 2016 WGC Bridgestone Invitational in Akron, Ohio.