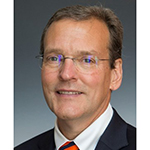 A uniquely qualified leader with a vast knowledge of and passion for Syracuse University Athletics, former ESPN executive John Wildhack was named Syracuse’s 11th director of athletics in July 2016.

At Syracuse, Wildhack leads the daily operations of a 20-sport athletics department with more than 600 student-athletes. During his tenure, he has worked diligently to create an environment that fosters academic and athletic excellence, which prepares student-athletes to be leaders in our global society. Those efforts have resulted in tremendous success both on and off the field.

In Wildhack’s first two years, 25 teams have represented Syracuse at national championship events, including 23 NCAA competitions. The Orange have captured 16 ACC championships (two team, 14 individual) and two national championships during his tenure. Syracuse student-athletes are succeeding at a high rate in the classroom, as well. The Orange had a record five teams post perfect four-year scores in the 2018 release of the Academic Progress Rate (APR), and the University’s four-year average of 987 is the highest since APR tracking began in 2006. In addition, the Orange student-athlete body achieved better than a 3.0 cumulative GPA in 2017-18, the second year in a row they surpassed that benchmark.

Since his arrival on campus, Wildhack has overseen multiple strategic initiatives to ensure the future success of the department. Among the most impactful have been securing a $118 million investment from the University for enhancements to the Carrier Dome and the formation of an in-house production unit. Authorized by the Board of Trustees in May 2018, the $118 million in funds enables the University to move forward with phase I improvements to the Dome, which include a new fixed roof, vertically-hung scoreboard, and state-of-the-art sound and lighting systems. The Syracuse Athletics Production team formed in the fall of 2017. In its first year, the group broadcast 91 live events and was responsible for more than 300 hours of content for the conference’s digital platform – ACC Network Extra.

Previously, during his distinguished career at ESPN, which spanned more than 30 years, Wildhack held a number of leadership roles and was responsible for several firsts at the network. Those firsts included producing ESPN’s first live regular-season college football game in September 1984 and its first live NFL game in August 1987.

A native of Buffalo, N.Y. and a 1980 alumnus of the S.I. Newhouse School of Public Communications with a degree in telecommunications, Wildhack joined ESPN in its first year of operation immediately following his graduation. An active alumnus of the University, he sits on the Advisory Board for the David B. Falk College of Sport and Human Dynamics and was an honoree at the “Newhouse at 40” Gala.