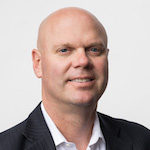 Ken Kerschbaumer is co-executive director of editorial services for the Sports Video Group and SVG Europe. He was a co-founder of SVG along with Paul Gallo and Marty Porter in 2005 and has been writing about how sports networks and leagues use video and audio technology to deliver a quality TV experience since 1991. Kerschbaumer began his career in 1991 at Television Broadcast magazine before joining Cahners where he was founding editor of Digital Broadcasting magazine. In 2000, he joined Broadcasting & Cable magazine as senior editor of technology where he covered all aspects of broadcasting, cable, and internet content creation and distribution.